PublicSource – When Betty Foster-Pinkley’s mom passed away in 2010, she took over responsibility for the family house in the East Hills.

The house she and her six siblings grew up in is at the very bottom of Dornbush Street. With a slope of 32 degrees, Dornbush is the second steepest street in Pittsburgh and the eighth steepest in the entire country.

During Pittsburgh’s record rainfalls in 2018 and 2019, rainwater flooded Foster-Pinkley’s basement. Her water heater, furnace, air conditioners and some mementos from her children and grandchildren were damaged. She had to pay about $3,000 for replacements and repairs out of her own pocket because it was a natural flood, not a broken pipe that her home insurance would cover.

The flooding was so bad, she said, it flooded a nearby apartment building and knocked over a wall. The flooding seems worse than when she was a kid, she said. “I remember it flooding, but not as bad as it’s been flooding.”

Dornbush Street is twice as long as the country’s steepest street, Canton Avenue in Beechview.

“It’s a white water rapid when it rains there,” said Michael Hiller, the assistant director of UpstreamPgh*, an environmental nonprofit that used to be called The Nine Mile Run Watershed Association.

The view from the bottom of Dornbush Street in the East Hills. (Photo by Quinn Glabicki/PublicSource)

Later this summer, UpstreamPgh is planning to start construction on a large rain garden in the empty lots across the street from Foster-Pinkley’s home. The $190,000 project will capture a half million gallons of rain per year and limit the flooding in front of her house. Hiller said UpstreamPgh only has the resources to take on about two of these big projects every year, with the money it gets from grants, donors and its paid work.

And it wasn’t a coincidence that it chose Dornbush.

Last summer, UpstreamPgh completed a study of the Nine Mile Run watershed, layering a series of environmental, health and demographic data points to figure out where in the watershed they should prioritize new projects. The Dornbush project is one of the first projects that is being prioritized as a result of that study.

UpstreamPgh’s effort is part of a new trend among local environmental nonprofits and city agencies to map out where the area’s environmental problems intersect with the human needs that environmental solutions could address.

Two years ago, the Pittsburgh Parks Conservancy created a plan for a new parks tax that would prioritize spending on major renovations according to who lived in the neighborhood as much as the conditions of the parks. The proposal prioritized major greenspace improvements in communities with high poverty, health problems and violent crime. Although the proposal ran into controversy at Pittsburgh City Council, the city is now collecting the tax money and outgoing Mayor Bill Peduto has endorsed the conservancy’s plan for how to spend it.

The Negley Run Task Force, a group that is promoting large-scale landscaping projects to capture rain in neighborhoods like Larimer and Lincoln-Lemington-Belmar, commissioned its own mapping study this year. The task force has identified tens of millions of dollars in potential projects, though it likely won’t be able to attract the funding to do them all at once.

John Stephens, who chairs the Negley Run Task Force, said the reason he wanted to identify where the inequity is concentrated is because stormwater projects have multiple benefits, not just removing sewage and preventing flooding. For example, trees can make it cooler for elderly residents in the summer, increase home values and clean the air for kids who have asthma. Without these equity studies, he said, projects could be built where people complain the loudest rather than where there is the most need. 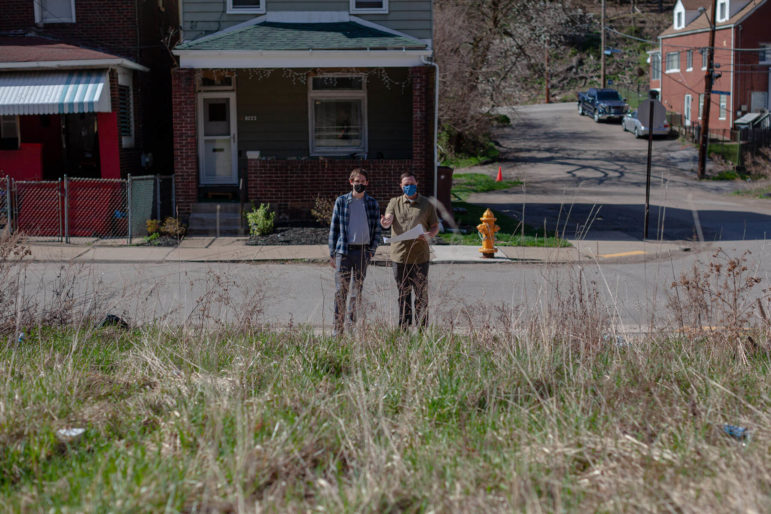 Michael Hiller and Aaron Birdy, the authors of Upstream’s equity study, stand in front of Foster-Pinkley’s house and the vacant lots where their new rainwater capture project will be built. (Photo by Quinn Glabicki / PublicSource)

Next year, UpstreamPgh plans to spend nearly $600,000 through a state grant to capture rain and install landscaping at two parking lots in Wilkinsburg, another project that will improve one of the micro-neighborhoods they identified as having the greatest need. It will be the group’s largest project since its stream restoration in Frick Park, said Brenda Smith, UpstreamPgh’s executive director.

“A lot of the environmental movement over the years has focused on things that are not the aspects of ecological restoration that matter most to people in low-income communities,” she said.

When UpstreamPgh goes into communities like Wilkinsburg and East Hills, Smith said, they often focus their conversations on things like the air quality benefit the community will receive, rather than the benefit to the water quality of the stream in Frick Park.

“For poor people who don’t get to go to the park very often, it’s not at the top of their agenda,” she said. “But if their kids have asthma, having good air quality is.”

Natural disasters that are likely to get worse with climate change, such as flooding, exacerbate existing inequalities, said Carolyn Kousky, the executive director of the Wharton Risk Center at the University of Pennsylvania. That’s because low-income families often don’t have the savings, credit or insurance to help them weather storm damage. Even when there is federal disaster aid, it provides only a tiny portion of the payouts that insurance typically does, she said.